A few years ago I made a bark sonnet, and the fun part wasn’t writing the sonnet, which was mediocre, but in gathering the bark, and putting the piece together. The best part of it was the fact that it was created on a liquor store bag.
A recycling of the items around me. This year I decided to do the same thing and I was going to use bark again, but really didn’t want to do the same sort of thing again. So, I decided to use something different. After thinking on it for awhile, I decided on rose petals. There were two dozen rose petals, one red and one pink that I began drying in my room shortly after valentines (don’t fear, I bought a dozen myself because I was so WORTH it–the other dozen was someone else’s).

In the previous year I used wood shavings rescued from reconstruction of the entry way into the college for the lines of the sonnet. This year, I gathered dried spider plant leaves, soaked them in water, and then straightened them with my tiny flat iron.

I assembled the dried rose petals, layer by layer (there are about 4 layers) on a liquor store bag (some things must remain constant). This time I even put a string on the back of the back to hang it from the wall (the string is recycled from the balls kept in a drawer (it arrives wrapped around newspapers)). 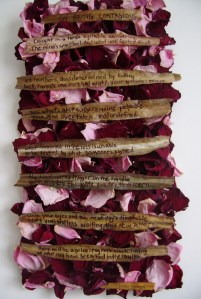 Update: The sonnet has been purchased by a fan for a lovely sum of money that is being donated to the SWG Colony.

And because whose to say the poem isn’t just as important, here is the sonnet:

Caught in a three syllable cankering.
The mind’s small boil. And what will fester first

are numbers, days determined by looking
back, towards one parched night, your untamed thirst—

the two-fingered trigger on the handle,
guilt-slippery thoughts you try to discern.

Close your eyes and the next day’s timetable
tests you; endless waiting, this new pattern.

There will be a price: regret’s stark lining,
or what may have been had in the coming.

4 thoughts on “PART OF A SERIES”

Links to my stuff

“Take warning from all those times when on meeting again, we feel ashamed because we realize we had accepted the false simplification which absence permits, its obliteration of all those characteristics which, when we meet face to face, force themselves upon even the blindest. Where human beings are concerned, the statement ‘nothing is true’ is true—at a distance—and the converse is also true—at the moment of confrontation” --Dag Hammarskjold.