…I read Devin Krukoff’s debut novel Compensation. I was curious about the book as it had been shortlisted for 2 awards at the recent Saskatchewan Book Awards, and because Krukoff is a former Regina resident and a product of the creative writing program at UVic.

So I read the book in a few hours. I don’t intend for this to be a review, but here are some thoughts about the novel.

The comment made by the rockstar earlier holds true for me as well. I was expecting the novel to move beyond what it attempts to do (which, according to the blurb is an anatomy of a life of avoidance) –although I’m don’t think it fulfills the anatomy part as the bones, while solid, are not broken enough to fit the coffin.

The short novel (there were only 147 pages, and there was at least an inch margin on each page) spanned the life of Richard Parks, a chronic manipulator addicted to illness as a means of emotional control over others. The opening pages were vivid (much like movie narration during flashbacks, the 1st person narrator attempts to snatch the reader’s collar during his flashbacks and pull the reader along); they captured an immediate oddness to the life surrounding the character, an intrigue to the outcome, and a sadness.

The characterization of Richard reminded me of the protagonist from John Fowles’ first novel The Collector. There is an emotional distance to the main character that the reader understands, and through 1st person narration the reader swims through the consciousness of the character; however, because the swim was often in tepid, shallow water, I ultimately ended up having no sympathy for Richard. Interestingly enough, I wanted to feel something for him, even if it was pure disgust. The plunge into psychological illness is poetically written, and often the language is quite compelling yet I couldn’t help but feel there was something missing–or perhaps this was point of the novel, that Richard’s inertia in life is something no one can understand, so while the reader is able to pinpoint the moment of crisis/incident for Richard, it is the reader’s incomprehension of difference that is alluded to.

The writing, the language, and the style were all quite good. While I wanted to see more scenes (more action/dialogue) rather than lengthy narration, the descriptions were clear and startlingly refreshing in their composition.

Despite the refreshing language, there was no tension in the novel. This alone was interesting, as I thought there might be the character’s personal tension, a waffling between what is normal and what is not, but I suppose the point is that the reader is certain that Richard was never normal to begin with. The failing relationships are in his mind, and the failure to comprehend the world around him causes him to fail in comprehension of his own life. I felt that I needed to read more of the mystery surrounding the circumstances of normality–if that makes any sense. While the reader is in his mind, the reader still isn’t sure the why and who of Richard. The novel sits on the surface of the illness, floating on Richard’s need to fake illness without ever needling through the layers.

Overall, I felt it was a good attempt at attempting the unknown mind of the physically able, yet unstable need to be compensated in the odd personality of Richard Parks. While intriguing, the book never seems to move beyond the pale path of its narrated tale.

…you’ve been following along with the present alluded to more than once by the rockstar Rhett on his blog, and the huge amount of elaboration surrounding this present, I’m happy to report that the gift has exceeded all expectations. Yes. It’s nothing I could ever have imagined, but something I’m using right now. It’s something people laugh oddly at, but can’t keep from rolling about in their fingers. It’s something unique, but oddly useful.

Now, I can’t get any more detailed as the happy, snow-cavorting, you-tube poet-star has not yet received hers in the mail. I can only say, the rockstar has outdone himself. I’m not sure how he’s going to top this one next year. 🙂

Being busy these past few weeks, I really didn’t feel like the holiday spirit had waved its sparkled wand over me, but the other morning restored a small part of my faith in the human spirit, and that the cliché/folklore “appearance can be deceptive” (probably, in fact, part of the problem of modern society’s alienation) is more true than I thought. I was walking to work from the parking lot the other morning, not a far walk, very short indeed, and walking down Albert St. was a frightening looking fellow, rather tattered in clothing, rather transient by appearance; for a moment I held my purse a little tighter, myself a little tauter, but upon passing me, the man simply said: “Good morning, Merry Christmas” and continued to walk past.

Sometimes we need to be reminded.

…so this isn’t a very good shot, but here’s this year’s model (the top of my window is probably close to 7 feet high): 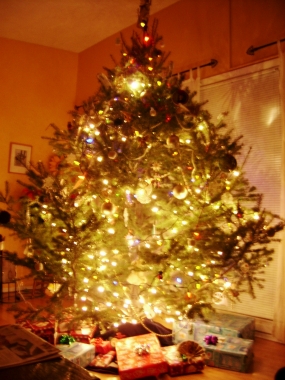 …I’ll write. Something. I’ve been really focused on studying this week; I finished two finals, and already have one mark in. I have one final left to write on Tuesday; the philosophy class about Hannah Arendt. I have one paper to revise and hand in for my honours thesis. I have some last minute shopping to do. (I like to wait until the last minute because there’s some sort of thrill in rushing–perhaps the adrenalin rush is what I crave–the thrill of simply making snap decisions). I have to finish cleaning the house, as I got sidetracked by studying, and I must wander the halls of the liquor store in search of free gifts (attached to the bottles of booze–I’m such a sucker for the “free” gifts–they make great stocking stuffers!) I must take a picture of the tree, as it looks pretty good this year; the tree is almost 9 feet and has its own santa-belly.

I’ve been reading (on the sly of course, because I’m supposed to be studying) Aberrant Lounges by kimmy beach, a wonderful little book, and on stealing lips by Lars Palm–which I’ve only skimmed so far. I read another good Martian Press chapbook this summer: acts of barbarity and vandalism by Daniel Tysdal.

…is as good as a rest they say. (I wrote a poem (shocking I know but I did, I did) the other day using “they say” as the focal(vocal)point and it turned out very interesting indeed). Now that I have the time to write, I’ll be really writing, but not blogging much. Which doesn’t mean much, except that I won’t be updating this blog, as I’ve moved shop to another blog; if you want to find me you can head over there.

…here’s something I was going to buy myself for Christmas (I’ll still probably try to find a wonderful old copy of it around somewhere), but I guess I don’t have to wait to read it.

…I’ve been a bit lazy with the blog. I’ve had the time to write, but haven’t. Not that I didn’t have anything to write about (that’s never stopped the drivel from dropping off the fingertips before), and not that I didn’t think about writing a post or two, but I think I prefer to say I was blog-blocked. Yeah, that’s the ticket: blog-blocked.

That’s all my news for now. Not much of an unblock.

Time to search for the biggest tree I can find.

Time to shop for presents.

(as Prufrock says: “There will be time…)

Time for a quiz .

Time to make your mark.

Time to visit the paradox of Christmas, where the best and the worst of people shines like tinsel on a tree (I’ve always hated tinsel).

Time to say: Nothing says Christmas like a caffinated clerk after the 5th complaint in a row.

Time for you: Nothing says Christmas like…(this is where its your time…insert your own line here and then in the comments).

Links to my stuff

“Take warning from all those times when on meeting again, we feel ashamed because we realize we had accepted the false simplification which absence permits, its obliteration of all those characteristics which, when we meet face to face, force themselves upon even the blindest. Where human beings are concerned, the statement ‘nothing is true’ is true—at a distance—and the converse is also true—at the moment of confrontation” --Dag Hammarskjold.